See description above for other special combat skills.

Leonard (alpha) on the prowl

"Have you ever been alone at night, thought you heard footsteps behind and turned around and no-one's there? And as you quicken up your pace you find it hard to look again because you're sure there's someone there."

Leonard is a Leopard that haunts Irilion by night (except during the special day Leonard's Day when he is out all day). His name is Leonard (alpha) but is mostly known as Lenny. Leonard is an very aggressive creature that attacks players regardless of Monster Magnetism Perk or Monster Magnetism Cloak when lenny thinks he can win the fight.

Lenny's visibility is low and tends to stay away from large groups and well-lit areas. Leonard prefers to prey upon lonely harvesters without any weapons and armour. Lenny's attack is over 100 and defense is much lower, so to fight lenny successfully, you need a weapon and armour so you can kill Lenny before Lenny kills you. Lenny gains pick points by killing players - one attribute increase per kill. Thus for every kill, Lenny becomes more dangerous. He loots player death bags for any items he can use.

Note: Lenny also attacks other creatures he encounters, and will loot the gold coins and some potions they drop (i.e. gargoyles dropping Potion of Defense).

Respawn time becomes strange since Leonard has his own little island where he spawns - that island isn't reachable for players. When Lenny gets bored, he teleports to another map and starts his search for victims.

Lenny uses Rings of Disengagement and Potions of Body Restoration as well as Potions of Great Healing. It is not an easy fight to try and kill Lenny although many have tried because of his fur that is used to make the Potion of Speed Hax.

Lenny's cooldown time appears to be lower than players. Lenny has used multiple Rings of Disengagement quickly when stacked by multiple characters.

Leonard is not like any other creature in Eternal Lands. Because of his AI, Lenny behaves more like a predating player then a creature. The best way to avoid Leonard is to stay inside on C2 during nighttime.

Leonard can post messages in channels 6 (invasion channel) and 8 (Leonard channel). He talks when he wakes up, when he kills someone, when he is killed and when he goes to sleep.

The amount of rings and potions he drops varies since Lenny uses them when fighting. Thus the amount depends on how many Leonard had from the start and also how many he has been able to loot from previous victims. 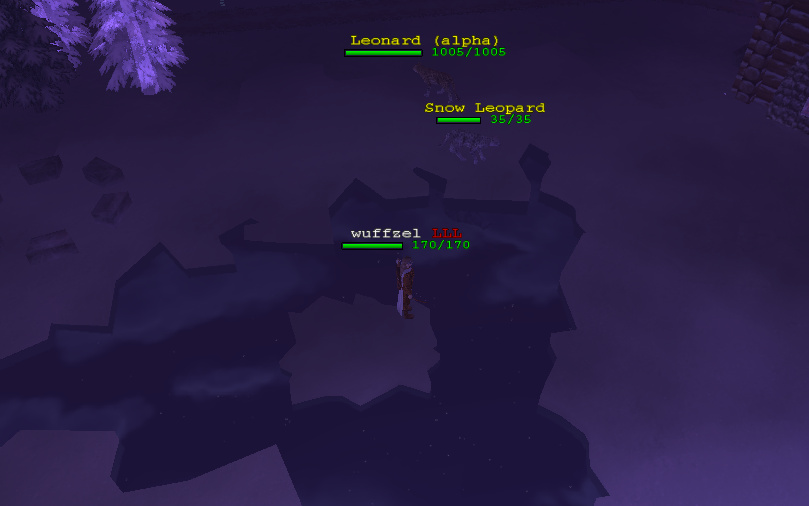 When you try to attack Leonard, he will most likely flee from the fight after a few hits. It will use a ring of disengangement and you can not move for three seconds. If you are alone or you have low perception, it is possible you loose sight of him when it runs away. <br\> The Day of the Brave can play to your advantage, because Leonard will not be able to use a dis ring and flee, or to your disadvantage because he will win the fight and kill you :) In a fight to the dead he will use up all of his GHP (80 health) and later starts using BR (30 health) which makes him a bit easier to kill then. As long as Leonard is drinking potions his health will not drop below 70. <br\> After the update from 08 July 2016 Leonard has become significantly stronger. His basic health is usually at 160 while and his a/d is around 160/90 or greater when he has killed before. <br\> Players like to use weapons with high damage such as:

Leonard crys after it has been killed:

Hunting in a group